A lot can happen in 9 years. Back then I was still advocating that you should unit-test your controllers and that setter injection is very helpful when replacing controller dependencies with test doubles. I've changed my mind: constructor injection is the right way for any service object, including controllers. And controllers shouldn't be unit tested, because:

The alternative I mentioned in 2012 is to write functional tests for your controller. But this is not preferable in the end. These tests are slow and fragile, because you end up invoking much more code than just the domain logic.

If you're using a decoupled approach, you can already test your domain logic using fast, stable, coarse-grained unit tests. So you particularly don't want to let your controller tests also invoke domain logic. You only want to verify that the controller correctly invokes your domain logic. We've seen one approach in Talk review: Thomas Pierrain at DDD Africa, where Thomas explained how he includes controller logic in his coarse-grained unit tests. He also mentioned that it's not "by the book", so here I'd like to take the time to explain what by the book would look like.

Following the example from my previous post, this is a schema of the use case "purchasing an e-book":

PurchaseEbookController and PurchaseRepositoryUsingSql are adapter classes (which need supporting code from frameworks, libraries, etc.). On the left side, the adapter takes the request data and uses it to determine how to call the PurchaseEbookService, which represents the port. On the right side there is another port: the PurchaseRepository. One of its adapters is PurchaseRepositoryUsingSql. The following diagram shows how this setup allows you to invoke the left-side port from a test runner, without any problem, while you can replace the right-side port adapter with a fake repository: 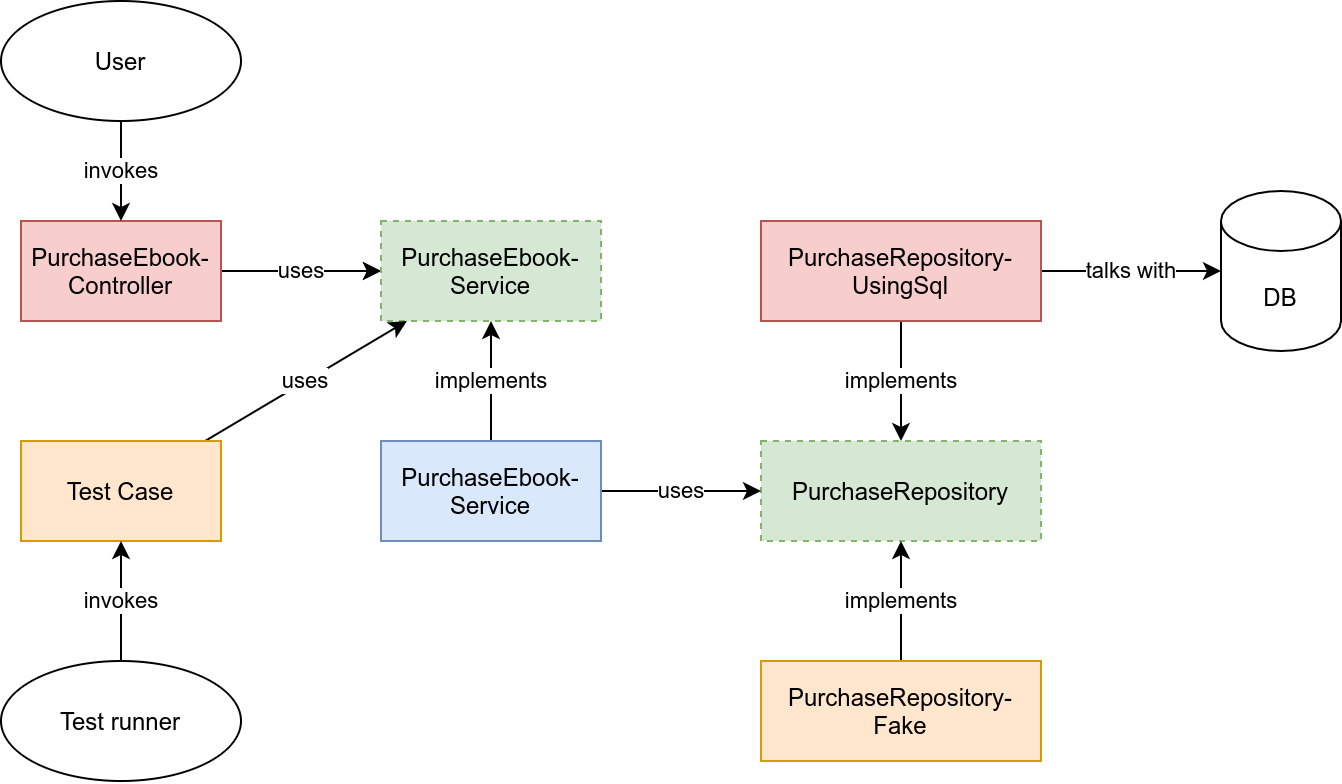 Since the test case replaces the controller, the controller remains untested. Even though the controller should be only a few lines of code, there may be problems hiding there that will only be uncovered by exploratory (browser) testing or once the application has been deployed to production.

In this case it would help to create an adapter test for the controller. This is not a unit test, but an integrated test. We don't invoke the controller object directly, but travel the normal route from browser request to response, through the web server, the framework, and back. This ensures that we got everything right, and leave (almost) no room for mistakes in interpreting framework configuration (routing, security, dependency injection, etc.).

We have already established that you wouldn't want to test domain logic again through a web request. Two things we need to solve for adapter tests then:

There are three approaches that I can think of when you want to test a left-side adapter like a controller.

First, you could define an interface for each application service, like the PurchaseEbookService. This isn't a nice option in my opinion:

Second, you could use a command bus. The interface is generic: a handle() method with a single argument for the command object. When you pass a PurchaseEbook object to it, it will forward the call to the PurchaseEbookService (or ...Handler):

In left-side adapters you can inject the command bus by its interface as a constructor argument.

The downsides of using the generic CommandBus interface are:

Which is why I've been experimenting with a third approach: the application-as-an-interface. All the left-side ports are combined in a single interface, which you could call ApplicationInterface. You could also use the name of the module, subdomain, etc. like EbookStoreApplicationInterface.

This has the following advantages.

Additionally, the ApplicationInterface wraps the entire Domain and Application layer (as explained in Does it belong in the application or domain layer?), which is a great of way of forcing domain-level implementation details behind an abstraction.

Using the application mock when testing

Now, how to use the ApplicationInterface mock when testing? You need to be able to rewire the dependency graph. That is, when the application runs in adapter-testing mode, the mock should be provided to e.g. the controller. Dependency injection containers usually have a feature for this, where you can override certain service definitions when the application runs in a certain environment. How you do that depends on whether you want to run the test against the web server or against the code. Frameworks like Symfony and Laravel provide options for both. If you run the test against the code, e.g. using Symfony's WebTestCase the test looks something like this:

This test verifies that, given a certain request (submitForm()):

Since we have replaced the injected ApplicationInterface service, this doesn't actually invoke any domain logic. We only verify that the controller itself behaves well.

If you want to test against a real web server, you have to do a little bit more work. We'll discuss this some other time.

Symfony2: Framework independent controllers part 2: Don't use annotations Book excerpt - Decoupling from infrastructure, Conclusion A wave of command buses Collecting events and the event dispatching command bus Responsibilities of the command bus
Comments
This website uses MailComments: you can send your comments to this post by email. Read more about MailComments, including suggestions for writing your comments (in HTML or Markdown).
Comment on this post by email
Ben Roberts
02/03/2021

Having this general ApplicationInterface is all well and good, and I thought this was interesting in your last post "Does it belong in the application or domain layer?" too.

However, surely this interface is going to grow quite a bit, as it will contain all of your use case commands for the module - and the implementation is going have all the dependencies as well. Seems like a candidate for a big ball of mud.

What other negatives have you discovered with this approach?

Let me put on my framework extension (e.g.: bundles, plugins or modules) maintainer hat for a moment.Would you use the ApplicantionInterface approach in framework extensions as a main entry point for provided features?  How could you provide BC promise for an interface like? For me, it seems there is a high chance that methods come and go in this interfaces, parameters can also change - which means regular major releases.  (Downstream developers could freak out ;P )Having just a final Application class could be better in this situation because you can more easily add a BC layer (nullable parameters, alternative methods, etc) for a time being and you can communicate upcoming changes with @trigger_error('XY is deprecated in my_component:1.10.2 and will be removed in my_component:2.0.0', E_USER_DEPRECATED). Although, if you have a final class only, mocking becomes a little bit complicated, but not impossible.  Plus if every dependency of an Application has an interface (which may or may not be part of a extension's public API), you can easily swap them.This approach could also work with other, more granular services, which makes the service collector solution unnecessary.PS: I must admit you perfectly summarized my struggling with having interfaces for almost every service is Hexa/Ports&Adapters which makes complicated to limit the public API that I would like to expose for downstream developers.There is also an other pattern that I have used and saw others are using it too: MyModule/Foo/Contracts/MyService (which is the interface) and MyModule/Foo/MyService which is a default implementation that implements the interface by using aliasing (e.g: final class MyService implements MyServiceInterface)

Great question, Biczó. I honestly don't think the ApplicationInterface approach will be very useful for frameworks. The purpose is being able to replace the complete domain logic with a single test double. Frameworks, I think, are better off with single-purpose contracts (e.g. a Router interface).

Something else to consider: how can a framework can better support the ApplicationInterface approach, or a ports/adapters approach in general?

I totally agree that these are valid concerns ("Does it scale?" :). Yes, I think this works best with smaller, focused modules. I haven't done this in practice, but it may even be a great way to keep contexts more "bounded", that is, let contexts communicate between each other via ContextInterfaces. I'm still looking for more design feedback on this.

To keep the number of dependencies down, you may also delegate the call to a service locator, like most command buses do anyway. E.g. $this->container->purchaseEbookService()->purchaseEbook().