This is a response to Peter Petermann's article Composer and virtual packages. First, let's make this totally clear: I don't want to start an Internet war about this, I'm just pointing out some design issues that may arise from using Composer's provide option in your package's composer.json file. This means it's also nothing personal. To Peter: you wrote a very nice article and shed light on an underused feature of Composer. Thank you for that!

The situation Peter describes is a library that makes use of the LoggerInterface as defined in PSR-3:

This LoggerInterface is readily available as part of the psr/log package. So this library explicitly mentions this package as a dependency:

[...] since you are building your lib so it needs a log provider injected (and if it is a NullLog), you want your dependencies to reflect that.

This is both true and false. Yes, if a user wants to run the code in your library, they need to have some class that implements LoggerInterface. But no, this shouldn't be reflected in the dependencies of the library. Let me explain this by taking a look at the Dependency inversion principle.

Why we depend on interfaces: dependency inversion

We could have chosen to require one specific logger, for example the Zend logger (or the Monolog logger, or Drupal Watchdog if you like). Our code would have looked something like this:

We'd have to reflect this in our list of dependencies of course:

Now we can do a little bit better, by depending on the interface Zend offers, instead of the class. This would allow others to implement their own logger class, which implements the Zend logger interface (maybe it can be an adapter for their own favorite logger).

But it doesn't really make a difference, since people would still have the zendframework/zend-log package pulled into their project for (almost) nothing.

To solve this issue, we may apply the Dependency inversion principle here. We want to invert the direction of our dependencies. We can do this in two different ways.

Solution 1: define your own interface

The first way is to define our own Logger interface, inside the library:

One advantage of this approach is that we can define only the methods we need. A big disadvantage is that if we do this for each and every dependency we will end up with a lot of interfaces in our library, which requires you to also write a lot of adapter classes to make existing implementations conform to those interfaces.

But still, in the example above we did invert the dependency direction. We started with this:

Then, we introduced our own LibraryLoggerInterface and this effectively removed any dependency arrow outwards. We introduced an adapter package which makes the Zend logger compatible with our logger interface. Looking at the modified dependency graph, we see that it contains a new dependency arrow, but this one points towards our library package:

To overcome the problem of needing numerous adapter packages before we can finally start to use a library in our application, we can also try to define some common interfaces for things every library uses/needs. This is where PSR-3 steps into the picture. It tries to offer something very much like dependency inversion: a general logger interface which does not come with any concrete implementations.

This psr/log package is a highly abstract, independent, and therefore very stable package. It doesn't tell you anything about how to implement a fully functional logger. Our example/mylib package therefore only depends on abstract things, instead of concrete things, which is what the Dependency inversion principle is all about.

Back to to square one: Composer's provide

That was quite a bit of theoretical background. Now, back to where this all started: Composer has this feature which allows you to tell what kind of "virtual packages" a package provides. In the case of the psr/logger there are multiple logger packages that provide an implementation of the LoggerInterface from that package. These packages mention in their composer.json that they provide a psr/log-implementation package (you can find a list of PSR-3 compliant logger packages here):

This is a really cool feature. Especially since you can just "define" any virtual package by mentioning it under your own provide key. 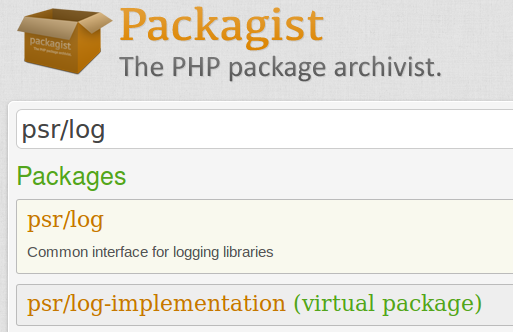 But you have to think very hard before you use this provide feature. Peter suggests that the example/mylibrary package should not only have psr/log as a dependency, but it should also depend on the virtual package psr/log-implementation:

He thereby wants to communicate that in order to use this library, you also need a package which offers an implementation of LoggerInterface from psr/log. I don't think this is a good idea (as you might have guessed ;)). These are my reasons:

But then, when should I use provide?

When the package knows about existing virtual packages

One interesting legitimate example I came across was the DoctrinePHPCRBundle. The bundle offers a Symfony-specific configuration layer for using PHPCR ODM with one of the existing PHPCR implementations (don't ask me what all these words mean, since I don't know much about them ;)). The actual PHPCR implementations packages jackalope/jackalope and midgard/phpcr both provide the virtual package phpcr/phpcr-implementation.

From the perspective of the DoctrinePHPCRBundle it makes sense to use virtual packages, since it actually knows about the existing phpcr/phpcr-implementation packages and it allows users of the bundle to pick one of them. Whether you choose the midgard/phpcr or jackalope/jackalope implementation package, the bundle knows how to correctly configure services for them.

On using PSR abstractions Final classes by default, why? Reusing domain code Packages: the case for clones Backwards compatible bundle releases
Comments
This website uses MailComments: you can send your comments to this post by email. Read more about MailComments, including suggestions for writing your comments (in HTML or Markdown).
Comment on this post by email
superiorpapers reviews
05/04/2016

The technique and information that you have shared looks helpful and there will be a lot of advantage that a person could get from this. It will going to help them in making their project's interface to become more effective and would help them in going on the right path that they desired to have.

Matthias, IMHO you're right at most of your points

It has no sense for me to work using this feature without any formal convention. the PHP-FIG should handle these definitions (like does with all PSR) and provide all the namings, to make sure there are no problems across all projects.

I think that, also, packagist should provide a mechanism some kind of "confidence list", to report the grade of standardization is the virtual packages provided by any library.

This would be a nice feature :)

I understand the real why of this feature, but I don't really like this way to create "random" virtual packages.

There you go Marc, a much delayed response: thanks. And yes, this could be some kind of a standard, since it's more about rules than things that you can actually verify programmatically.

Point 2 is correct of course but one mitigating factor is that if your application itself has a logger then you can just as well add the "provide":{"psr/log-implementation":"1.0"} in your app's composer.json and things will install fine. It doesn't really force you to require a package providing it.

The rest is rather ideological/theoretical IMO so there is nothing much to say. I don't agree with everything but it mainly depends on where you draw the line of what is too risky or not convenient enough.

Hi Jordi, thanks for sharing your insights (and sorry for my delayed response!). It's a good idea to have the application itself "provide" the virtual package. I think my main concern (although that may be a bit clouded by the other secondary concerns) is that it would not make sense to require both the interface package and an implementation. Requiring the interface package already communicates clearly the fact that you would need an implementation for that too.