A couple of weeks ago the reader count of my first book A Year With Symfony reached the number 365. It seemed to me an appropriate moment to write something about my experiences. In this post, I will not be too humble, and just cite some people who wrote some very nice things about my book on Twitter.

The book was highly anticipated ever since I first wrote something about it on Twitter. Leanpub book pages have a nice feature where users can subscribe to news about the book release.

Over 500 people entered their name, many also their email address, which would earn them a royal discount.

@matthiasnoback Cool ! It's hard to wait :)

On September 4th the official book presentation was part of a meetup of the Dutch Symfony2 Usergroup meetup in Amsterdam, at the headquarters of Dutch hosting company Leaseweb. As part of a lightning talk about the book, I released the book by pushing the "Publish Book" button.

All attendees were able to see the book being published in real-time, step by step. Even at the last moment, people were subscribing to make use of the introduction offer!

Wow @matthiasnoback - A Year with Symfony is 171 pages of well written work, w code examples - like your blog https://t.co/c6Ca1fwko1

Judging from @matthiasnoback's presentation I saw earlier this year, his Symfony2 book could be a winner https://t.co/JE4123zo45

The offical Symfony2 documentation, The Book, is so to say pretty descriptive: it tells you mainly how you can do things with the framework. A more prescriptive book, saying how you should do something, was actually missing. But this is software development. There are principles, no golden rules, so I tried to be not too rigid or forceful. In the end I'm happy to see that many people agree with me.

@matthiasnoback enjoyed reading your book - should be mandatory reading for any Symfony developer.

The book contains many guidelines for developing Symfony2 projects in general: generally applicable advice, which is nevertheless very specific and pretty advanced. It is therefore not an entrance-level book about Symfony2, just like most of my blog posts about the framework.

@matthiasnoback so far, I've only read the httpkernel events chapter. SO well explained.

Still, A Year With Symfony is very different from any of my blog posts: it contains much more practical information than some of my posts, to which you may never refer while working on a Symfony2 application.

@matthiasnoback Congratulations for this very well written book! Though I am missing a chapter about custom metadata factories. :-)

After a couple of weeks, the printed edition of the book became available. It has been for sale on Amazon and soon it will be via lulu.com which has much more realistic shipping rates and printing on demand.

Some people had already found their own ways to print the ebook:

Our CEO @karstenfrohwein liked @matthiasnoback 's book so much he got it printed and bound :D pic.twitter.com/h8MZD9YIvz 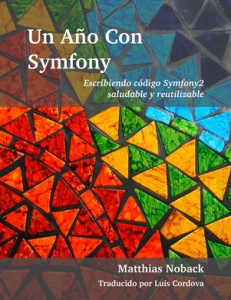 The adventure still continues: Luis Cordova, Ariel Ferrandini and Cristian Martin have been working on a Spanish translation, which has been released last week.

Other people are working on a Polish version and a Portuguese version.

In conclusion, to all my readers: thank you very much for supporting me and my writings!

The release of Object Design Style Guide Style Guide for Object Design: Release of the PHP edition Principles of Package Design, 2nd edition The release of "Microservices for everyone" Preparing a Leanpub book for print-on-demand
Comments
This website uses MailComments: you can send your comments to this post by email. Read more about MailComments, including suggestions for writing your comments (in HTML or Markdown).
Comment on this post by email
ulrik
22/10/2013

the book is great, but man - i wish there was a printed edition :)

Thanks, Ulrik! I agree - I have a couple of printed books here, but shipping them via amazon.com has proven to be very expensive. So the book will soon be available via lulu.com, which has printing-on-demand and much more reasonable shipping rates. It should be a matter of days before you can order it there.