About 2 years ago I created a package that combines the power of two famous Symfony components: the Form component and the Console component. In short: this package allows you to interactively fill in a form by typing in the answers at the CLI. When I started working on it, this seemed like a pretty far-fetched idea. However, it made a lot of sense to me in terms of a ports & adapters architecture that I was looking for back then (and still always am, by the way). We could (and often should) write the code in our application layer in such a way that it doesn't make a big difference whether we call applications services from a web controller or from a CLI "controller".

As described by Bernhard Schüssek (author of the Symfony Form component) in his article Symfony2 Form Architecture, the Form component strictly separates model and view responsibilities. It also makes a clear distinction between processing a form and rendering it (e.g. in an HTML template). If you're familiar with Symfony forms, you already know this. You first define the structure and behavior of a form, then you convert it to a view (which is basically a DTO). This simple data structure is used to render HTML.

This strict separation of concerns has brought us a well-designed, yet fairly complicated form component. In my quest for "console forms", this was a great gift: it was actually quite easy to render form fields to the terminal output, instead of to an HTTP response.

I decided to rely on the existing Question Helper which allows console commands to ask questions to the user. This basically left me with the need for "bridging the gap" between the Form and Console component. This is a quick list of things I needed to fix:

A short list of changes in external libraries that have been causing trouble so far (I'm by no means criticizing the Symfony development team for this, it just might be interesting to share this with you):

Follow the instructions from the README of the project to install the package and register it in your project as a Symfony bundle. Then define a Symfony form type like this:

Now create a data class for your form, like this:

Register it as a console command and run it: bin/console form:demo. The output will look something like this (provided you've also added an email field an a country choice field): 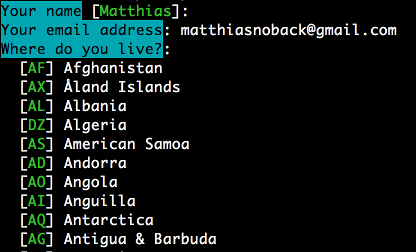 Although it took some fiddling, along the way I found out that the Form component is in fact very suitable for types of input/output other than just plain old HTTP requests/responses.

I also found out that it was impossible (and still is, I think) to globally register:

So I created event listeners and compiler passes to accomplish this. These may deserve their own bundle at some point. Feel free to create it, based on the code from this package.

The main use case for me so far was to demonstrate delivery-mechanism-agnosticness of application services in my workshops. But I've heard of projects adopting this package to allow installation wizards to be used from the CLI as well as the web.

This package might make it easier for you to get started with interactive console commands if you already know how to work with forms - in that case, you don't need to learn anything new.

Anyway, I'd love to hear what you're doing with it!

Decoupling your security user from your user model New book: Recipes for Decoupling Too much magic? The Dependency Injection Paradigm Dynamically changing the log level in Symfony apps
Comments
This website uses MailComments: you can send your comments to this post by email. Read more about MailComments, including suggestions for writing your comments (in HTML or Markdown).
Comment on this post by email
craig heydenburg
22/01/2017

The behavior of a ChoiceQuestion changed at some pointThis is related to the choices_as_values option (https://symfony.com/doc/cur... which was changed in Symfony 2.7 and the value of false was deprecated and removed from 3.0.> form types changed to being fully-qualified class names instead of simple namesThis was also deprecated in 2.something and removed in 3.0.> Anyway, I'd love to hear what you're doing with it!The Zikula project has used this library since early in its development in our CoreInstallerBundle - https://github.com/zikula/c... - to simply implement both an http and cli method of installing our core. We have the older (Symfony-2.8 compatible) in use in our 1.4 branch and the newest (3.x compatible) version in use in our master branch. check out the project at https://github.com/zikula/core and http://www.zikula.org/Great project! Thank you for its continued development!

Thanks for elaborating on this, Craig!